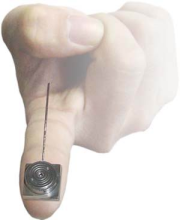 A hidden camera is a still or video camera used to film people without their knowledge. The camera is "hidden" because it is either not visible to the subject being filmed, or is disguised as another object. Hidden cameras have become popular for household surveillance, and can be built into common household objects such as smoke detectors, clock radios, motion detectors, ball caps, plants, and cellphones. Hidden cameras may also be used commercially or industrially as security cameras.

This unique device was created for professionals in the sphere of the surveillance countermeasures. Thanks to its optical principle the WEGA can discover lenses of all types of covert cameras not depending on their working state. The WEGA’s LED matrix radiates a powerful infrared beam which is then reflected by a video camera’s optics and is easily detected by the operator. The IR-filtering glass built into the WEGA helps the operator to avoid natural reflections from surfaces and concentrate on finding the exact location of a hidden camera.