Telephone tapping (or wire tapping/wiretapping in the USA) is the monitoring of telephone and Internet conversations by a third party, often by covert means. The telephone or wire tap received its name because, historically, the monitoring connection was an actual electrical tap on the telephone line. Legal wiretapping by a government agency is also called lawful interception. Passive wiretapping monitors or records the traffic, while active wiretapping alters or otherwise affects it. http://en.wikipedia.org/wiki/Telephone_tapping

The contracts or licenses by which the state controls telephone companies often require that the companies must provide access for tapping lines to the security services[citation needed] and the police. In the U.S., telecommunications carriers are required by law to cooperate in the interception of communications for law enforcement purposes under the terms of Communications Assistance for Law Enforcement Act (CALEA).

When telephone exchanges were mechanical, a tap had to be installed by technicians, linking circuits together to route the audio signal from the call. Now that many exchanges have been converted to digital technology tapping is far simpler and can be ordered remotely by computer. Telephone services provided by cable TV companies also use digital switching technology. If the tap is implemented at a digital switch, the switching computer simply copies the digitized bits that represent the phone conversation to a second line and it is impossible to tell whether a line is being tapped. A well-designed tap installed on a phone wire can be difficult to detect. The noises that some people believe to be telephone taps are simply crosstalk created by the coupling of signals from other phone lines.

Data on the calling and called number, time of call and duration, will generally be collected automatically on all calls and stored for later use by the billing department of the phone company. These data can be accessed by security services, often with fewer legal restrictions than for a tap. This information used to be collected using special equipment known as pen registers and trap and trace devices and U.S. law still refers to it under those names. Today, a list of all calls to a specific number can be obtained by sorting billing records. A telephone tap during which only the call information is recorded but not the contents of the phone calls themselves, is called a pen register tap.

For telephone services via digital exchanges, the information collected may additionally include a log of the type of communications media being used (some services treat data and voice communications differently to conserve bandwidth).

Conversations can be recorded or monitored unofficially, either by tapping by a third party without the knowledge of the parties to the conversation, or recorded by one of the parties. This may be legal or not depending upon the circumstances and the jurisdiction.

There are a number of ways to monitor telephone conversations. One of the parties may record the conversation by several methods, either on a tape or solid-state recording device, or on a computer running call recording software. The recording,whether overt or covert, may be started manually, automatically by detecting sound on the line (VOX), or automatically whenever the phone is off the hook.

The conversation may be monitored (listened to or recorded) covertly by a third party by using an induction coil or a direct electrical connection to the line using a beige box. An induction coil is usually placed underneath the base of a telephone or on the back of a telephone handset to pick up the signal inductively. An electrical connection can be made anywhere in the telephone system, and need not be in the same premises as the telephone. Some apparatus may require occasional access to replace batteries or tapes. Poorly designed tapping or transmitting equipment can cause interference audible to users of the telephone.

The tapped signal may either be recorded at the site of the tap or transmitted by radio or over the telephone wires. As of 2007[update] state-of-the-art equipment operates in the 30–300 GHz range. The transmitter may be powered from the line to be maintenance-free, and only transmits when a call is in progress. These devices are low-powered as not much power can be drawn from the line, but a state-of-the-art receiver could be located as far away as ten kilometers under ideal conditions, though usually located much closer. Research has shown that a satellite can be used to receive terrestrial transmissions with a power of a few milliwatts. Any sort of radio transmitter whose presence is suspected is detectable with suitable equipment.

Conversation on many early cordless telephones could be picked up with a simple radio scanner or sometimes even a domestic radio. Widespread digital spread spectrum technology and encryption make eavesdropping this way much more difficult.

A problem with recording a telephone conversation is that the recorded volume of the two speakers may be very different. A simple tap will have this problem. An in-ear microphone, while involving an additional distorting step by converting the electrical signal to sound and back again, in practice gives better-matched volume. Dedicated, and relatively expensive, telephone recording equipment equalises the sound at both ends from a direct tap much better. 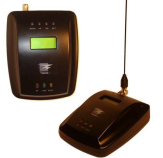 What can I do if I think my phone is tapped?

If you think your phone line is wiretapped, call your local phone company. Most phone companies will inspect your lines for wiretap devices free of charge. If a tap is found, the phone company will check to see if it is authorized. The phone company will alert you if the wiretap is illegal. It will also notify law enforcement and remove the device. However, you will not be notified if the wiretap is legal, made by law enforcement and authorized by a court. However, once a legal wiretap has been discontinued, the court must notify the tapped party that the wiretapping has taken place. Normally, this notice must occur within 90 days of the wiretap termination. (18 USC 2518(8)(d))

If you discover that someone has intentionally intercepted your private phone conversations, you may be able to take legal action. If you or the phone company find an illegal tap, you should notify local law enforcement officials. In addition, you may want to consult an attorney.

Many people think if they hear noises on the phone line, like clicks, static or voices, that the line is tapped. Most wiretapping devices emit no audible sounds. If you hear others talking on your phone, you may simply be experiencing "crosstalk," a common phone problem. If you hear crosstalk or other sounds, call your local phone company's repair service and ask it to investigate the problem. Cordless telephones also may pick up others' conversations. This can happen if you and a neighbor have cordless phones which are tuned to the same channel.