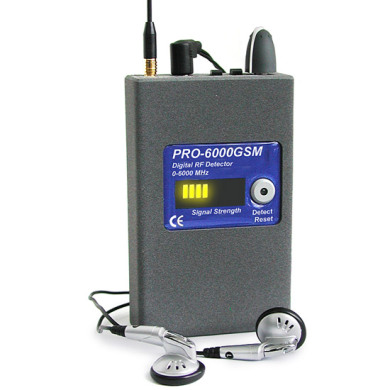 The PRO6000GSM is now widely regarded as the 'industry standard' professional pocket Bug Detector. It features the very latest digital technology and is particularly suited to locating hidden devices such as GPS trackers, GSM (mobile phone) based bugging devices such as 'ghost' phones as well as all other conventional 'bugging' devices. It now features a mammoth 0 to 6000 MHz (6 GHz) Frequency range as well as increased sensitivity to ensure that even the most sophisticated devices can be located. Such devices include miniature room bugs, mains powered bugs, telephone bugs, video transmitters, mobile telephones, GPS trackers, walkie-talkies etc. A 10 LED bargraph display indicates signal strength along with an audio tone, enabling you to pin point the transmitter precisely. If you wish to check for transmitters without alerting others the PRO6000GSM can be set to vibrate mode. If any signals are detected the unit will pulse vibrate silently, allowing you to keep it concealed on your person, in a jacket pocket, for example. Once you have located a suspect signal using the PRO6000GSM by simply attaching the supplied headphones you can use the 'Demodulation' facility to identify whether the suspect device is transmitting any audio such as that from a bugging device microphone or a telephone bug transmitter. A special feature of the PRO6000GSM is the Digital 'Peak Pulse' detector giving it the ability to locate modern devices that only transmit momentarily and are therefore easily missed using conventional bug detectors. Such devices include Trackers and GSM based devices where a 'Burst' signal or SMS (text messages for example) are sent occasionally. The PRO6000GSM will alert you if a device has transmitted within the vicinity even for just a fraction of a second.